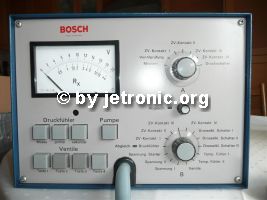 Chapter 1 of Dr-DJets D-Jetronic (some wrongly write D-Jetronik) series tells the history of electronic fuel injection systems from Bendix in 1957, first trials with AMC till it was first implemented by Bosch on 14. September 1967 in Volkswagen 1600 Type 3

I own my first classic car since 2007 and it happened to be a Mercedes-Benz 450SL reimported from Switzerland. In order to take optimal care of the car and in lack of a proper workshop I decided to get acquainted with D-Jetronic myself. As a scientist one tends to be curious and get deeper and deeper into new areas of interest. That's how I became a D-Jetronic specialist. Many things have been written about D-Jetronic, some only scratching the surface and some in a lurid way. So I decided in 2012 it's time to write an article covering it all. At first I wanted to publish one article in Sternzeit-107.de. But then I would not have been able to edit, correct and extend my article. Also layout was pretty limited. That's why I finally decided to build my own website and start a whole series of articles. Now that most of them have been finished in German, I start with translation to English. Despite of my Mercedes-Benz background I try to write about all vendor's cars with D-Jetronic. Let's see how many articles will be there when I have finished.

Linkage controlled in-line mechanical fuel injection pumps relied on a map on a 3D-cam (see Sterntwiete) that is mechanically read. It used engine revolutions, gas pedal position, engine temperature and altitude as input. It was imminent that the linkage between throttle and injection pump was exactly adjusted. Only by that the injection pump could properly adjust fuel amount to engine revolutions and throttle opening. Control was done by a mechanical controller with a 3D-cam at its heart. There was no direct information on engine load, only gas pedal position counted. Despite of that it was still superior to classical carburetors, both in performance and torque and fo sure emissions. As lean fuel mixtures are always dangerous for an engine, mixture was always set to be slightly rich. With starting exhaust rules in the US this was simply not good enough anymore.

Bendix Corporation from Chicago had already started in 1957 to develop the first electronic fuel injection system for a pre-series of AMC cars. It was too unreliable to be used in production. Chrysler started to equip 35 cars with Electrojector. Trigger points and distributor were still separate and electronics did not only look adventurous, it also used unreliable and drifting components. That is why customer service had to reinstall carburetors on all these cars. Most probably that's the reason why our D-Jetronic uses preselected and MIL components. Later Bendix sold its patents to Bosch in Germany.

So Bosch introduced Jetronic (only later it was called D-Jetronic) in mid 60s as the first successful electronic fuel injection system to replace carburetors mechanical injection systems while following new exhaust rules in the US. Not only did they replace mechanics by electronics, also input for injection was changed.

By sensors D-Jetronic was able to control fuel/air ratio in every load situation of the engine automatically. That meant a huge progress compared to carburetors and mechanical fuel injection systems.

Advantages of Jetronic over carburetors and MFI

The amount of air sucked in by the engine is indirectly determined by manifold vacuum. The Engine Control Unit (ECU) automatically adjusts the amount of fuel by length of injection pulses. Input for D-Jetronic therefore is engine revolutions, engine and air temperature, acceleration (gas pedal) and manifold pressure. "D" derives from the German word "Druck" for pressure. Carbon monoxide in exhaust was only controlled in an open loop during idle-speed. Closed loop lambda control was only introduced later in late 70s in its successor L-Jetronic. Fuel injection is intermittent and follows ignition sequence.

Of course mechanics were upset to see an electronic system superior to their mechanical systems. And it is true that they were unable to deal with electronic equipment and sent back a lot of ECUs and MAP sensors for repair that turned out to be fully okay. In fact I still see that happening today. With their typical wrong arguments of "complexity of an electronic system" they fought back with the rise of CNC machines. In 1972 Porsche introduced a fully mechanical continuously injecting system named K-Jetronic. K stands for "kontinuierlich", the German word for continuous. Mercedes followed in 1975. K-Jetronic measures air sucked in by the engine by means of a flow sensor. Both systems were further developed. D-Jetronic found its successor in L-Jetronic e.g in BMW, Porsche, Opel, Volkswagen). In 1978 L-Jetronic was the first system with lambda controlled closed loop control. Even K-Jetronic did not manage to withhold electronics. In 1985 Mercedes-Benz and others switched to KE-Jetronic where electronics was back.

Even that Mercedes-Benz was one of the broadest users of D-Jetronic, it was first introduced to the world on international Automobile fare (IAA) in Frankfurt, Germany from 14. to 24. of September 1967 in Volkswagen 1600 Type 3. Mercedes-Benz only started 1968 with its 250 CE Coupe, followed by its 8-cylinder 350 engine in 1969. That is how they escaped many early developments where there were many changes in altitude compensation and full load enrichment. Volkswagen over time used all various technologies of D-Jetronic, they only missed out on cold start valve control by ECU.

D-Jetronic was installed in many cars. Those are:

There were many changes in D-Jetronic. Absolute pressure switches were first replaced by a full load diaphragm in manifold pressure sensor (MAP), later by a contact in throttle switch. Cold start valves were sometimes controlled by ECU, but mostly externally. Even air temperature sensor, over-run shut-off and idle-run CO potentiometer are not always available. Mercedes later added 280 and 450 engine. With changes in emission rules in the US especially the 450 engine saw 3 different US specific ECUs and MAPs. Also others had to do specific US ECUs and MAPs and other emission control systems. After production holidays in 1975 Mercedes-Benz switched to K-Jetronic (only late 280s continued one more year) but it is true that D-Jetronic continued to be superior to K-Jetronic in both performance and torque and over-run shut-off until MB introduced its energy saving concept in late 1981. Other vendors stayed with D-Jetronics principles, Porsche switched from K- to L-Jetronic later.

D-Jetronic was also licensed to other OEMs. Isuzu's 117 Coupé used it only on Japanese market. Mitsubishi, Nissan and Toyota bought licenses and continued their own development. AE Brico from Coventry had also started to develop a Bendix based fuel injection system for Jaguars 12 cylinder, but ceased its development in 1970. After that Jaguar had to find another solution for their 12 cylinder that was finally installed from 1975 to 1980. As D-Jetronic could only handle 8 cylinders, it was modified by Lucas. Trigger contacts were replaced by 2 hall sensors and drivers for injection valves were installed in a separate external amplifier. If someone has some documentation on such licensed cars, I would be grateful for a copy to satisfy my scientific curiosity.

If you are looking for D-Jetronic components (especially but not limited to Mercedes-Benz) or wants to get rid of some, just drop me an email to This email address is being protected from spambots. You need JavaScript enabled to view it.. I run them on my test stand against my references (e.g. all 14 function blocks of an ECU) and make a test protocol and put them in my stock. Sometimes it gets too much and the best of all wifes demands eduction. I am always happy to help one of you in making his D-Jetronic run perfectly well again.

Chapter 11 of D-Jetronic article series by Dr-DJet describes testers that were made especially for t [ ... ]

Chapter 14 of article series by Dr-DJet gives you a detailled checklist for ticking off every single [ ... ]

Today1749
Yesterday1717
This week9939
This month6676
Total3911104
11
Online
Cookies make it easier for us to provide you with our services. With the usage of our services you permit us to use cookies and confim our data privacy policy.
Ok Decline
Data privacy